Vytjie Mentor (born 19 October 1963) is a South African politician who previously served as African National Congress Member of Parliament. She also served as Chair of the Caucus from 2004 to 2008. 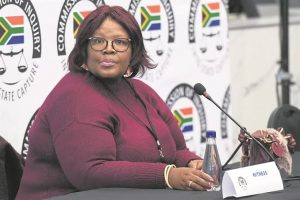 She attended Batlhaping High School Lokaleng in North West of South Africa. For her higher education, she attended Hebron College, Eastrand College, and the University of the Witwatersrand Johannesburg in Gauteng.

Mentor was the parliamentary caucus chairperson during Thabo Mbeki’s presidency from 2004 to 2008. In 2008, she was replaced by ANC MP Ncumisa Nkondlo.

She was appointed public enterprise portfolio committee chairperson in May 2009.