Mpho Makola (born 4 May 1986) is a South African professional footballer who plays as a midfielder for Premier Soccer League club Cape Town City and the South African National team. 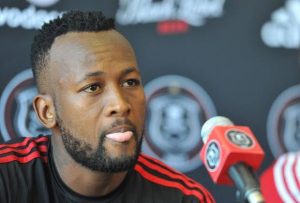 He attended Yeoville Community Primary School and Barnato Park High School for his primary and secondary education respectively. He actively involved in sports during his time in school but also used drugs and followed bad gang.

He is in a relationship with Tumi Mbanga. They have a son together.

For his youth career, Makola played for Bidvest Wits and Kaizer Chiefs. His first senior team was Free State Stars where he played between 2008 and 2012, made 71 appearances and scored six goals.

Makola then joined Orlando Pirates in 2012 where he scored 14 goals in 137 appearances. He played with the Pirates till 2019 then joined Cape Town City.

While at Kaizer Chiefs, Makola earned around R180,000 per month. His current salary at Cape Town City is not known.

Makola has an estimated net worth of R7.5 million ($400 000) which he has earned from his career as a footballer.

Drop your queries regarding Mpho Makola Biography below in the comment box.