Mcebo Dlamini (born 17 December 1986) is a South African politician and activist. He is a former President of the Students’ Representative Council of the University of Witwatersrand.

Dlamini was one of the student leaders of the #FeesMustFall campaign in South Africa. 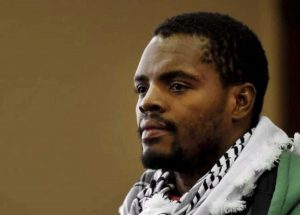 Dlamini obtained a law degree from the University of Witwatersrand. While in the university, he was the President of the Students’ Representative Council but was expelled in 2015 for misconduct.

He was also charged with assault, theft, and malicious damage to property in connection with the FeesMustFall movement.

In 2016, Mcebo Dlamini was arrested and charged with violating a court order, public violence, theft, malicious damage to property, and assaulting an officer during the protest.