Kaizer Motaung (born 16 October 1944) is a retired South African footballer and owner of Kaizer Chiefs. He is also a co-founder of the South African Premier League (PSL). 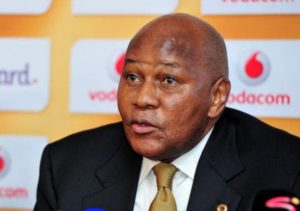 He first played professional soccer at the age of 16, for the Orlando Pirates FC. In 1968 he joined international soccer after Dick Cecil, Atlanta Chiefs Founder and Owner, and Phil Woosnam, manager of the Atlanta Chiefs franchise in the then-recently formed North American Soccer League (NASL) recruited him after team trials in Zambia.

Despite struggling to come to terms with the weather and overcoming injury, Motaung made his North American debut for the Atlanta Chiefs as a substitute in a friendly game against Manchester City, scoring two goals in the process.

The South African ended the season being voted NASL Rookie of The Year. Atlanta Chiefs were crowned champions that year, beating San Diego Toros over two legs in the final. Motaung scored the third goal in the 3-0 win in the second leg (the first had finished in a goalless draw).

The following season, ‘Big Boy’, as the South African was soon nicknamed in America, scored 16 goals in 16 matches, becoming the top goal scorer in the league.

The speedy forward was also voted onto the NASL All-Star Team. In 1975, he returned to the NASL to play two seasons with the Denver Dynamos.

He has served on both the National Soccer League (NSL) and South African Football Association (SAFA) executives.

In 1996 he co-founded, with Orlando Pirates’ Irvin Khoza, the South African Premier League (PSL), which helped bring more sponsors and money into South African professional soccer. He serves as a member of the PSL’s Board of Governors.

He assisted South Africa’s 2010 World Cup Bid Company and was a member of the delegation that went to the FIFA head office in Zurich to be declared the winning bid. Subsequently, he was also appointed as a member of the local organising committee for the 2010 event.

Kaizer Motaung is married to his lovely wife, Valeta Motaung.

Kaizer Motaung’s daughters are Jessica Motaung and Kemiso Motaung. Jessica Motaung runs Kaizer Chiefs Football Club’s communications. Jessica’s background lends itself far more to a position in front of the camera than one behind the scenes.

She was crowned Miss Gauteng, Miss South Africa First Princess and Africa’s Queen of Beauty in 1997. Jessica has been marketing manager of the football club since 2003.

He has an estimated net worth of $40 million.

In 1970 he started his own professional soccer team ‘Kaizer Chiefs’. Within a short time, the Kaizer Chiefs became the most successful team in South Africa, winning more than 78 trophies and gaining an estimated fourteen million supporters throughout the country.

In 2001 Kazier Chief won the African Cup Winners’ Cup, this was the teams biggest achievement.