Zizo Tshwete (born 12 December 1988) is a South African model, radio presenter, and TV personality. She is best known for hosting the SABC1 music show Selimathunzi between 2011 and 2015. 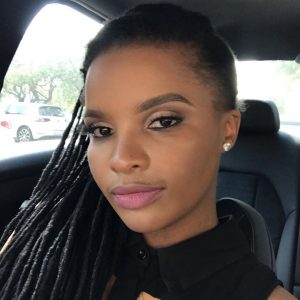 She attended Komga Junior for her primary education and Clarendon Girls High School for her secondary education. Both schools are located in East London.

While in secondary school, she enjoyed activities such as m tennis, netball, Tae Bo, debating, and drawing.

Zizo is married to Mayihlome Tshwete. The couple got married on December 11, 2015, at the Gonubie Manor venue in East London. They had the  Xhosa wedding the next day at Eastern Cape, King William’s Town.

They were both there for different reasons as Mayihlome Tshwete was part of the organizing committee while Zizo was there to cover the event for Selimathunzi. They have a son together named Vukile Tshwete. He was born in 2016.

In 2018, rumours flew around that Zizo and Mayihlome were separated. According to the Daily Sun, the couple were going through a lot of pressure and facing many challenges.

Zizo and her husband however, refused to make any comments as regard the claims. On March 16 2019, the couple still celebrated their son’s birthday together. That’s a beam of hope that they are still together.

She started her career as a presenter on Selimathunzi. She had however been in the limelight since she won the Miss South Africa teen crown in 2004. After she left Selimathunzi, Zizo joined the Masigoduke team.

She also hosted the Afternoon Express on SABC 3 and was the host of the  Lotto Live show on a weekly basis.

She has an estimated net worth of $200,000 which she has earned as a model, radio presenter, and TV personality.