Ludwick Marishane (born 23 May 1990 in Motetema) is a South African inventor and entrepreneur. He is the director of DryBath Pty Ltd and Headboy Industries Inc.

Marishane is known for inventing the DryBath, an all-in-one waterless bath gel that contains water, soap, and lotion. 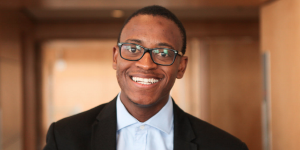 Marishane grew up in a poor environment and had a few family problems while growing up.

After living in Motetema for the early parts of his childhood, he relocated to Johannesburg with his father at the age of 8 years.

His father mentored him through his primary and secondary school education constantly enlightening him on the relevance of education.

He finished primary school at the top of his class and joined Maryvale College. Marishane continued with his academic excellence in high school and eventually won the 2004 Maths, Science and Technology Olympiad in Gauteng Provincial.

He had to return to Limpopo during the course of his education due to family problems where he completed high school.

Upon his completion of high school, Ludwick Marishane was offered a scholarship to study at the University of Cape Town (UCT) in South Africa.

The idea of inventing a water-less bath came up at 17 years old when his friend said while to him “Man, why doesn’t somebody invent something that you can just put on your skin and then you don’t have to bathe?”

He came up with the formula for the lotion six months later after he made a lot of research using Google and Wikipedia on various lotions.

Just before he graduated from high school, Ludwick came up with a business plan of about 8000 words in 40 pages. He wrote the business plan on a basic Nokia phone.

His efforts did not go unnoticed though, as when he was just in his first year in the University, he pitched his business plan in a competition and he took third place after the results were made known.

He was able to create a sample of his product using the prize money he won in the competition to check out the effectiveness.

It didn’t work as much as he would have liked as the gel produced flakes on the skin when it dried out, making it unpleasant to the eye.

The problem was however solved when he introduced Dr Hennie du Plessis, who was a chemical engineer that had experience in the development of personal care products.

Dr Hennie du Pleases improved the formula and the problem disappeared. Dr du Plessis eventually became a shareholder in Headboy Industries. He is also the product manager for the company.

Dry bath is not sold in bulk rather it’s sold in single small packets at a price of 50cents with one packet enough for one bath and $1.50 for corporate entities such as airlines and hotels.

He has an estimated net worth of $10 million to $50 million as he is listed as one of ten youngest richest South Africans.

He was also listed on “Africa’s Most Promising Young Entrepreneurs: Forbes Africa’s 30 Under 30” in the year 2015.

Drop your queries regarding Ludwick Marishane Biography below in the comment box.