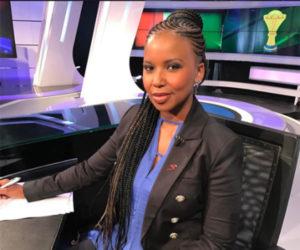 Carol got married to Solomon Manana while she was aged 19 years and together they both had two sons namely Joel and Solomon. Joel was born in 2002 while Solomon born in 2007.

Carol Tshabalala got divorced in December 2006 while she was pregnant with her 2nd son Solomon.

She has moved on since her divorce to Solomon Manana and currently has a boyfriend who is Sbu Motloung and is four years younger than her. She can be quoted saying about her young boyfriend

“SBU’S SO MATURE, HE UNDERSTANDS MY WORLD AND ISN’T INTIMIDATED OR THREATENED THAT I’M IN SPORTS AND MY COLLEAGUES ARE MEN.  I WAS WORRIED AT FIRST ABOUT THE AGE GAP BETWEEN US AND ALSO BECAUSE I ENTERED THE RELATIONSHIP WITH THREE KIDS. I DIDN’T KNOW HOW HE’D HANDLE THAT. BUT I’M ALSO SO YOUNG AT HEART AND HE GETS ALONG WITH MY CHILDREN SO WELL”

After graduating from Krugersdorp High School in 2000, she became a sportscaster for SABC. Until 2011, she worked as a voice-over artist, television anchor, and a programme director.

In 2005, she joined Kaya FM 95.9 for about 2 years as a sports news reporter, where she dealt with compiled and reported news on the breakfast show.

In 2011, she left SABC having spent 10 years and joined SuperSport. Tshabalala said one of her reasons for leaving was because she felt she was not used to her fullest at SABC.

Her minor role during the 2010 FIFA World Cup coverage bothered her because it showed that the channel didn’t have enough confidence in her to consider her for such a grand event.