She started her musical career in the year 2003 and her ever since gained so much recognition in South Africa. 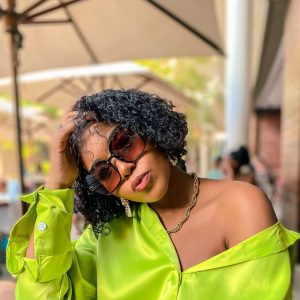 Cici had been keeping her fans in the dark about who her newfound love is. She dropped a picture of herself with her man’s hands which kept fans wondering who exactly he might be.

You can surely trust South Africans to dig deep and make research. It was found out that her bae is Puledi Manamela who is a Rugby agent and sports entrepreneur and is also involved in sports apparel and equipment.

On the 15th of May, Cici gave birth to her first child. She announced her pregnancy with snaps of her baby bump. In one of the pictures, she wrote an emotional caption where she revealed how the thought of ever bearing children seemed impossible.

Doctors had told Cici Twala that she would not be able to carry her own children after getting involved in a physical fight and car accident with her ex-boyfriend Arthur Mafokate.

The local singer revealed that her pregnancy was stressful and she was not able to get any physical support from her family due to Covid-19. She gave birth in May 2020.

Cici had been in a record label that halted her growth in her skills as a musician. She left the record label and released her album in 2017 and this returned her to winning ways.

Since she released her album, she has earned herself awards from SABC and Metro FM Awards.