Njugush (born 20 May 1981) whose real name is Timothy Kimani Ndegwa is a popular Kenyan comedian and actor who is considered one of the funniest comedians in Kenya. 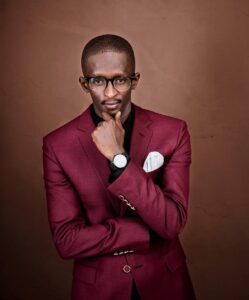 Njugush’s wife is known as Celestine Ndinda who he got married to in 2016. The couple met while in college at KIMC. Together they have a son named Tugi.

Due to his father’s job, he attended eight different primary schools because they had to move from one area to another. He studied Journalism at the Kenya Institute of Mass Communication (KIMC).

Njugush while growing up had always had a passion for acting even though he went on to study journalism. He hosted a reggae show on the school’s radio station, ECN while he was at KIMC.

Three days after he left high school, he auditioned at the Kenya National Theatre and this was how his acting career began

In 2013 screenwriter Abel Mutua saw a play he had done in 2011 and got in touch with him to cast him in a show he was starting which was titled ‘Hapa Kule’. The show eventually gained so much popularity on YouTube and it became a show on its own.

He has an estimated net worth of about $1 million which he has earned throughout his successful career in both acting and comedy.

Drop your queries regarding Njugush Biography below in the comment box.