Jason Willemse (born 20 March 1987) is a South African actor known for his role as Cameron Jansen in the e.tv soapie Scandal!. 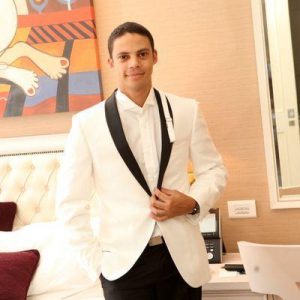 In 2006, he graduated from Northlink College in Cape Town with a diploma in entrepreneurship and business management, marketing management, and a computer skills program, among other courses.

He also finished the first year of a National Certificate in Drama at Northlink before continuing on to Tshwane University of Technology for the remaining two years of the diploma.

Jason made his television debut in 2012 as a guest star in an episode of the SABC1 sitcom City Ses’la.
He was cast in the recurring character of Cameron Jansen in the e.tv soapie Scandal! the following year, and made his first appearance in the role on August 5, 2013.

When Cameron was hired as a security guard at Safe and Clean, he became the first of a new family of five – the Jansens – to join the Scandal! universe.

However, the young man’s transfer to his new workplace was not simple, since family secrets from his past followed him to Joburg.
Jason played the character until the 2016 season when his story arc came to a logical conclusion.

Jason secured another recurring role after leaving Scandal! in 2016, this time as Clifford in the SABC1 soap Generations: The Legacy, making his first appearance on November 21, 2016.

He’s also appeared in a few kykNET short films, such as Skrikkeljaar and Die Webley.

Jason was cast as Wendell in the SABC1 serial uBettina Wethu, based on the worldwide series Ugly Betty, in 2021.

Drop your queries regarding Jason Willemse Biography below in the comment box.