Stephanie Sandows (born 29 October 1990) is a South African TV presenter and actress who came to limelight after her role in the television series, MTV Shuga. 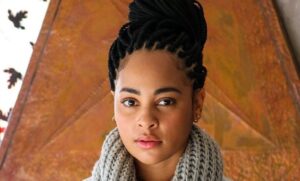 She obtained her Master’s degree in applied linguistics from the University of Johannesburg.

In February 2019, she got married to South African actor, Hungani Ndlovu who is also a fellow co-actor in the soap opera, Scandal.

The love birds met in 2015 and began a relationship in 2016. Their wedding was attended by close friends and family members.

While having her postgraduate studies, she went into moonlighting by creating subtitles for the soap Scandal!! She then became a co-host of e.tv’s Craz-e kids’ programmes alongside Thulisile Phongolo and also a presenter of the children’s religious show, Bonisanani.

Stephanie is well known for her intriguing roles in movies including her role as Ingrid, the daughter of Wesley Thompson in the South African series, Scandal!! and as Tsholo in the first series of MTV Shuga.

Apart from acting, she owns SAVS (Pty) ltd and is also the co-founder of Coilsnkicks.

She has an estimated net worth of about $200,000. Stephanie Sandows has earned all this from being an actress and TV Presenter.