Zweli Dube (born 26 October 1985) is a South African actor, MC, voice artist, and model known for his role as Pule Mapetla on the SABC2 soapie Muvhango. 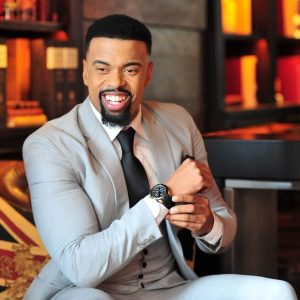 On the SABC2 soapie Muvhango, he made his television acting debut in 2009, playing James Motsamai’s (Dingaan Mokebe) lawyer Pule.

In 2016, Zweli made his feature film debut in Kalushi: The Story of Solomon Mahlangu.

In the same year, he appeared on Arthur Mafokate’s SABC3 late-night discussion show A Date with Arthur, in an episode alongside Kelly Khumalo and Nkuli Tshirumbula, which aired on November 19, 2016. (Season 1, Episode 6).

In 2018, he starred in the Mzansi Magic telemovie Preacher Bae, about an attractive pastor who arrives to lead a struggling church, only to be rejected by the community when his dark background and true identity are revealed.

Bujy Bikwa wrote, produced, and directed the film, which premiered on June 9th, 2018.

He had a supporting part in the comedy-drama series Agent, which aired on Netflix worldwide and on SABC1 in South Africa in 2019.

Drop your queries regarding Zweli Dube Biography below in the comment box.