Phindile Gwala-Ngandu (born December 1986) is a South African actress, dancer, and businesswoman. She played the role of Nonny Nkosi on SABC2’s Muvhango.

Phindile resigned from playing the role in 2017 after being a part of the series for five years. 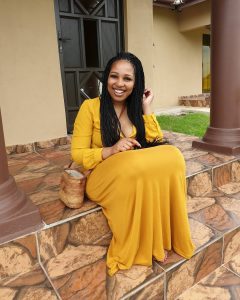 She was born to Christian parents, both of which were ministers of the gospel. She grew up in a small village that had little or no exposure to the fast life and the necessities needed for her to achieve her big dream.

Phindile did not let her background stop her from living her dream. She later moved to Johannesburg in pursuit of her dream.

After she graduated from high school, she did entrepreneurship studies at Raizcorp, then acquired her N5 business management certificate through South West Gauteng College.

In 2010, she joined the theatre and started doing stage plays around the country. Her debut on television was in 2012 when she played the role of Nonny Nkosi, the nosey receptionist on Muvhango. She left the soapie in 2017.

Phindile Gwala made her debut on Uzalo on 15 November 2019. She played the role of Diniwe, MaNgcobo’s cousin. The actress also starred in the movie ‘Looking for Love’ alongside Celeste Ntuli.

Besides acting Phindile is an entrepreneur. She and her husband opened a Shisa Nyama and a car wash spot.

Phindile also owns a catering company where they cook for government meetings, weddings, and many other things. She is also an MC, motivational, and public speaker.

The beautiful actress is married to a Congolese model and businessman, Armando Ngandu.

The couple met at a parking lot of a night club in Rosebank, Johannesburg, and dated for three years before finally tieing the knot on Christmas day in 2018.

Armando has a daughter named Lola from a previous relationship.

Thato’s father died in a car crash when she was a baby.