Celeste Ntuli (born 25 August 1978) is a South African comedian and actress. She studied entertainment technology at the Durban University of Technology.

She is referred to as the queen of the Zulu comedy and she is the first local female comic to record a one-woman show DVD. 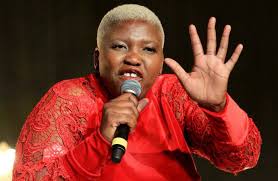 She made her acting debut in 2013 as one of the main cast of the Mzansi Magic telenovela isiBaya. She played the role of Siphokasi Zungu (45), the oldest of Mpiyakhe’s wives.

Her character is a respected childless matriarch with an irreverent, slightly wicked, sense of humour and a secret smoking habit.

She has starred in many movies and shows including: