Sthandwa Nzuza (born 9 February 1984) is a South African actress and radio DJ known for her recurring role as Innocentia on the SABC1 soapie Uzalo. 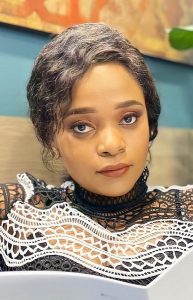 She was born on the 9th of February 1984 in Inanda, KwaZulu-Natal. As of 2021, she is 37 years old and celebrates her birthday on February 9th every year.

In 2017 she got married to her lifetime partner and prominent Pietermaritzburg businessman, Philani Gama.

She has appeared as a guest star in a variety of television shows, including Mtunzini.com, My Perfect Family, and Single Galz, among others.

She was also a guest on an episode of the SABC1 music conversation show Zaziwa in early 2014, which aired in the inaugural season.

In 2017, she starred in the Mzansi Magic telefilm Imbeleko, which was part of the “Lokshin Bioskop” strand of short films. On Saturday, September 23, 2017, the film premiered.

When Sthandwa was cast as Nomvula in the Mzansi Magic drama series Ifalakhe in 2019, she won her first starring role on television.

Drop your queries regarding Sthandwa Nzuza Biography below in the comment box.