Rhulani Mokena (born 8 January 1987 in Johannesburg) is a South African coach and the assistant manager of Mamelodi Sundown.

Mokwena made history by becoming the first coach to go on loan when Orlando Pirates announced that he would be joining Chippa on a short-term deal until the end of the 2019/20 season. 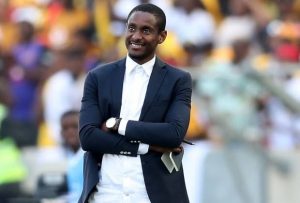 He was born into a football-loving family filled with South African football legends.

His grandfather and his father, Julius ‘KK’ Sono both played for Orlando Pirates while his uncle, Jomo Sono played as a midfielder. Jomo Sono is popularly known as the ‘Black Prince of South African Soccer’.

Mokwena has worked as an assistant manager to Pitso Mosimane at Mamelodi Sundown, Calvin Johnson at Platinum Stars and Milutin Sredojvic at Orlando Pirates.

Following the resignation of Milutin Sredojvic, he was appointed as interim coach of Orlando Pirates in August 2019.

In February 2020, Mokwena joined Chippa United on loan from Orlando Pirates. He became the first coach to join a club on loan.

The foundation is a non-profit organization that is committed to using football as a catalyst to advance the sustainable development goals; with education being our key focus because the foundation believes that education and football are two pieces of the puzzle that perfectly into each other.