MacDonald Mukansi (born 26 May 1975 in Boksburg) is a former South African football player who played as a forward for PSL clubs and the South African National team. 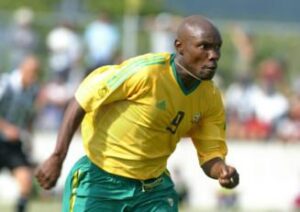 He joined the East Bengal Club of Kolkata in India for the 2007-08 season. After impressing during recent trials, he completed his move to Premiership rookies Bay United on a one-year deal.

Mukansi also played for the South Africa national football team and participated at the 2002 FIFA World Cup hosted in Korea-Japan.

Drop your queries regarding MacDonald Mukansi Biography below in the comment box.