Moss Makwati is a South African presenter who is famous for the slim fit suits that he pulls whenever he is on TV and the controversial shows that he hosts. 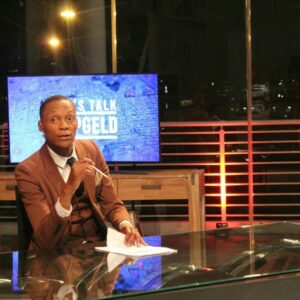 He is best known for hosting No Excuse: Pay Papgeld, but he was allegedly dismissed from the program in 2019. According to rumors, he was fired because of the show’s poor ratings. Makwati vanished from the screens for a few months as a result of this.

Moss returned to the screen on May 10th, 2020, during the day’s episode of Uyajola 9/9. He took over hosting duties from Jub Jub after assisting a young man in confirming his suspicions that his girlfriend was cheating on him.

Moss Makwati previously worked as a part-time host on the programme. His return, however, has stirred debate on social media. The majority of show fans seem to be impressed with his return, while others say he isn’t as hyped as Jub Jub.

Drop your queries regarding Moss Makwati Biography below in the comment box.