Sizakele Khumalo-Zuma (born 2 March 1940) is the first wife of Jacob Zuma, the former President of South Africa. She served as the First Lady of South Africa during her husband’s term as president. 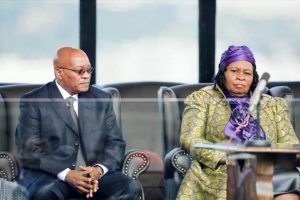 She is married to Jacob Zuma. The couple met in 1959 and got married in 1973 after Zuma had spent 10 years in prison. They have no children together.

Jacob Zuma  is a polygamist who has been married six times. He is estimated to have 21 children.

Zuma became the 4th President of South Africa after the general election in 2009, and chose Khumalo to be his First Lady from 2009 to 2014, after which he chose one of his other wives, Nompumelelo Ntuli Zuma, to succeed her.

She is the founder of the Sizakhele MaKhumalo Zuma Foundation.