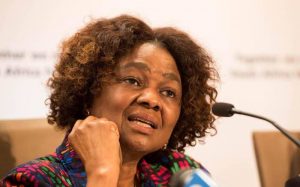 Hlengiwe Mkhize (born 6 September 1952) is a South African politician who currently serves as the Deputy Minister in the Presidency for Women, Youth and People with Disabilities.

She has previously held the position of Minister of Higher Education and Training and served as a Member of Parliament since 2009.

She is married to Pat Mkhize. Her husband is a commissioner for the protection and promotion of Rights of Cultural, Religious and Linguistic Communities. They have a daughter Londiwe Mkhize.

Mkhize has an estimated net worth of $1 million which she has earned from her career.