He enjoyed mixed successes, managing South Africa to winning the 2009 Tri-Nations, a test series win over the British and Irish Lions and a memorable first victory over New Zealand in Dunedin.

However, he also became known for his controversial off-field comments. South Africa finished bottom in the 2010 and 2011 Tri-Nations, and following a quarter-final defeat to Australia in the 2011 Rugby World Cup did not renew his contract. 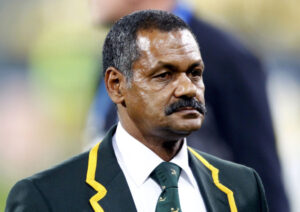 He coached amateur club Tygerberg in 1996 and 1997, and the Western Province Disas in 1997. In 1998, he enjoyed his first major appointments as an assistant coach for Western Province in the Currie Cup and also the South Africa national under-19 side, which he took to third in 1999 Under 19 Rugby World Championship.

He took the Falcons through the 2002 and 2003 Currie Cup campaigns before going on to coach the South Africa national under-21 rugby union team between 2004 and 2006.

In 2004 Under 21 Rugby World Championship, South Africa finished third, but won in 2005 and came second in 2006. In 2007, De Villiers was appointed coach of the Emerging Springboks and led them to the title of the 2007 Nations Cup.

The Springboks won 30 of their 48 matches under the helm of De Villiers. The 62.5% win percentage includes a 47% win percentage against the All Blacks, having played them 11 times and losing 6 matches, one of which was 40-7. A record defeat at the time.

De Villiers was hired by Zimbabwe on a two-year contract in February 2018 – for a reported R115 000 per month salary – with the aim of getting the country back to the Rugby World Cup for the first time since 1991. Not only did Zimbabwe fail to make the 2019 World Cup, but they were also nearly relegated from Africa’s top-tier competition, and De Villiers was fired shortly thereafter.

Drop your queries regarding Peter de Villiers Biography below in the comment box.