Natasha Thahane (born 25 September 1995) is a South African actress popularly known for her role as Enhle on the SABC1’s Skeem Saam between 2015 and 2016.

She is also the granddaughter of popular South African Archbishop Emeritus Desmond Tutu. 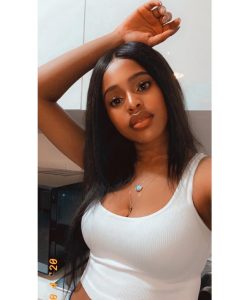 Thahane’s parents are Nomaswazi Mamakoko and Trevor Thamsanqa Tutu. Her father is the son of Archbishop Emeritus Desmond Tutu.

The beautiful actress attended Milnerton High School in Cape Town and went on to the University of the Witwatersrand where she studied accounting. Natasha Thahane also studied at the New York Film Academy.

She is currently in a relationship with an American guy and has been flaunting pictures of them together over social media.

The actress was previously in a relationship with South African musician, Bohlale Makgolane, also known as Bo Maq.

Nathasha was rumoured to be dating rapper, A-Reece but she shut down the rumours saying they are very good friends.

Natasha Thahane has an estimated net worth of $500,000 which he has earned through her successful career as an actress.