Rosie Motene (born 7 September 1974) is a South African actress, television presenter, activist and global speaker. She is best known for her role as Tsego Motene on the SABC1 soapie Generations. 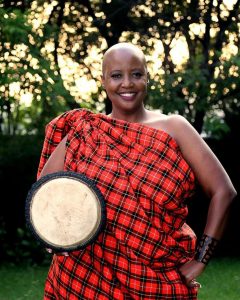 She attended Pretoria Girls High School. She proceeded to drama school at the University of Witwatersrand, where she studied Bachelor of Arts in Dramatic Arts and graduated with honors.

Motene was born during the apartheid era. Her father was a petrol attendant while her mother was a domestic worker for a Jewish family. Her family lived in Phokeng, Rustenburg.

She was, however, adopted by the Finkelsteins, the Jewish family her mother worked for. Her adopted family was white and so raised her as such. Growing up, she hated being African and even did not want to learn her native language or tradition.

After her foster family relocated to Israel, and she had to go live with her foster brother. While there, she struggled with her identity and decided to go live in Phokeng with her family. There, she learned to communicate in Tswana.

With the help of her family, her psychologist and counselling, she was able to get back on her feet and discover who she really is.

The actress is currently not in any relationship. She has been a victim of relationship abuse when she was in Grade 12 and dating a boy from Rwanda.

She even got pregnant but had to go through an abortion because of the psychological torture she was going through.

Motene is also an author. She wrote a memoir, Reclaiming the Soil.