Nadia Nakai (born 18 May 1990) also known as Bragga, is a South African rapper and songwriter. She is popular for her song ‘Naaa Mean‘ which was released in 2017. 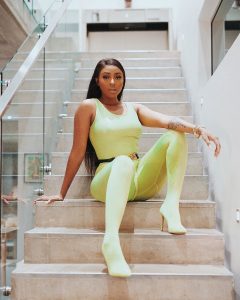 Nakai was born to a South African father and a Zimbabwean mother.

She completed secondary school at Fourways High School then went on to study Marketing, Communication, and Media Studies at Monash University, Johannesburg.

There were also speculations that the rapper was in a relationship with Cassper Nyovest because of how close they are.

Nadia shut down the rumours referring to Cassper as a family and nothing more.

Nakai released her debut album titled ‘Nadia Naked’ on June 28, 2019. The album was nominated for Album Of The Year in Southern Africa in 2019 All African Music Awards.

She had earlier released an extended play (EP) titled ‘Bragga’ in 2016.

She has an estimated net worth of R11.8 million which she earned from being a rapper, social media influencer and from several endorsement deals, including Reebok and Redbat.

Drop your queries regarding Nadia Nakai Biography below in the comment box.