She is one of South Africa’s fastest rising stars and has shared the stage with Chris Martin, Cardi B, Shawn Mendes, Janelle Monáe, and The Weekend. 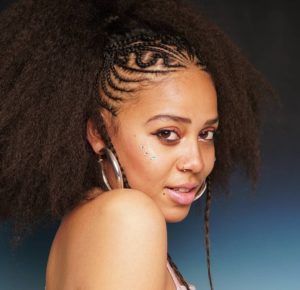 The SA rapper was born on the 9th of May 1992 in Shirley Village , Limpopo Province in South Africa. Sho Madjozi is 29 years old as of 2021.

She had her high school education in Dar es Salaam, Tanzania, and attended Mount Holyoke College on scholarship in the United States of America.

It was in the United States she completed her Bachelor of Arts degree program majoring in African Studies and Creative Writing.

She was born to an African mother, Rosemary Phaweni, and a Swedish father, Marc Wegerif. She is the only child of her parents together but has half-siblings on both sides.

Madjozi’s father ran a non-governmental organization and traveled to different countries of the continent.

This gave Madjozi the opportunity to travel with her father to places like Dar es Salaam in Tanzania and Senegal while as a teenager.

After her parents divorced at an early age, she was mainly brought up by her mother.

Sho Madjozi has dated a few times in the past but is now focused on her career and so presently not in a relationship.

She threw a jab at one of her ex-boyfriends during her acceptance speech at the 2019 South African Music Awards, dedicating the song “Idhom” to him while also stating that he is probably regretting it.

She has an estimated net worth of about $500,000 which she has earned as a musician.

On 27 November 2020, she released her first mixtape titled “What a Life”, featuring some local talents who hail from her home province in Limpopo, including acts such as Makhadzi.

Drop your queries regarding Sho Madjozi Biography below in the comment box.