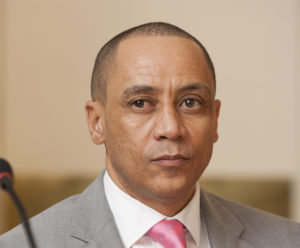 He was born in the year 1964 in KwaThema, Springs, South Africa.

He graduated from Limpopo University with a post-graduate science degree. He received an honors degree from Rand Afrikaans University, as well as certificates in business and human resource management.

He is happily married to his beautiful wife, Sandi. Together, they are blessed with two beautiful kids.

He began his career as a schoolteacher before moving on to various HR positions with Unilever, Bayer, BHP Billiton, and Impala Platinum until 2007.

Mike left Impala in 2008 to become one of the founding members of Optimum Coal (he was named CEO) and was involved in the company’s JSE IPO in March 2010.

Mike Teke resigned as CEO in September 2012, after Glencore purchased and delisted Optimum, and became Non-Executive Chairman until April 2015.

He has an estimated net worth of $64 million which he has earned as a businessman.

Drop your queries regarding Mike Teke Biography below in the comment box.