Kurt Schoonraad is a South African comedian, actor, presenter and MC. He hails from Mitchell’s Plain, Cape Town, one of South Africa’s largest townships. Kurt believes the township played an influential role in developing his sense of humour and comedy style.

His journey to success in the comedy industry started at an early age. And over the years, he has developed the ability to create an atmosphere filled with laughter and consistently satisfying his fast-growing audience. He is best known for hosting the travel TV show “Going Nowhere Slowly.” 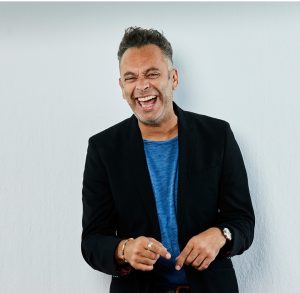 At the age 10, he joined the Creative School Of Speech And Drama and fell in love with the stage. He had his high school education at Rocklands Senior Secondary where one of his teachers, Mr Keston inspired him towards acting and entertainment.

Upon the advice of one of his friends in 1999, Kurt Schoonraad tried out for the Smirnoff Comedy Festival’s New Faces search. He was accepted to perform as part of the festival’s stand-up comedy line-up.

In 2000, Kurt Schoonraad joined the Cape Comedy Collective. This was the platform that gave him the opportunity to perform his own brand of observational humour. He went to perform his comedy routines at various South African festivals including Oppikoppi Music Festival, the Hermanus Whale Festival and the Cape Town International Comedy Festival.

The comedian is married to Katrin Bohlender. She is the owner of Africade Productions, a Cape Town-based full-service production company that was established in 2001. They have a son named Jack.

Kurt’s professional comedy career dates back to almost two decades ago. After performing in various festivals, he wrote and directed his own show “Punchlines” that ran at the Baxter Theatre in Cape Town. He also consistently performed stand-up comedy onstage.

Following his appearance on the hit TV series “Going Nowhere Slowly”, he became nationally popularly known. He has since been acknowledged as one of SA’s favourite TV personalities, hosting game shows, appearing in the well-known BBC format “Who Do You Think You Are?” and “Comedy Central presents Kurt Schoonraad”. He stars in various big-screen productions, with his most recent lead performance in the international award-winning South African movie “Skeem”.