King Mswati III (born 19 April 1968) is the King of Eswatini and head of the Swazi Royal Family. He was born to King Sobhuza II and Ntfombi Tfwala.

At the age of 18 on 25 April 1986, he was crowned as Mswati III, Ingwenyama and King of Swaziland, thus at that time becoming the youngest ruling monarch in the world.

In December 1982. he sat for the Swaziland Primary Certificate examination at Phondo Royal Residence and received First Class with merit in Mathematics and English. 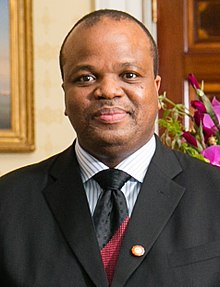 He currently has 15 wives and 23 children. His first two wives were chosen for him by the national councillors.

King Mswati is worth a reported $200 million according to the Forbes 2009 list of the World’s 15 Richest Royals.

Drop your queries regarding King Mswati III Biography below in the comment box.