Mantwa Matlala is the wife of South African parliament member, Julius Malema. She is an accountant by profession. 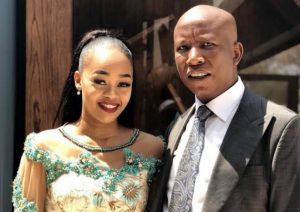 Matlala was born in Seshego, Limpopo, South Africa. Her age is not known.

She grew up in Seshego’s Zone 1 area and attended Capricorn High School.

Matlala is married to Julius Malema. Their romantic relationship started while she was still in high school.  The couple got married on 27 December 2014 in a private ceremony in Seshego.

She has two sons for Julius Malema; Kopano and Munzhedzi Malema.