Kenny Kunene is a businessman and Secretary-General of the Patriotic Alliance. He was born on 21st October 1970 in the township of Kutlwanong in Odendaalsrus in the Free State province of South Africa.

Kenny attended primary and secondary school in the Free State province and later he attended Vista University now the Central University of Technology where he obtained his teacher’s degree. 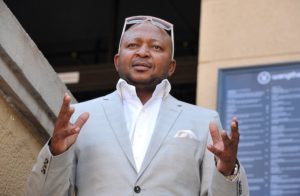 He was born on the 21st of October 1970 in the township of Kutlwanong in Odendaalsrus in the Free State province of South Africa. As of 2019, he is 49 years old.

In the year 2013, Kenny Kunene joined Julius Malema on his political party Economic Freedom Fighters (EFF). He later formed his own political party, Patriotic Alliance (PA), with business partner and friend Gayton McKenzie which contested the 2014 General Election of South Africa to a dismal outcome. He officially departed from politics in October 2014.

Kenny Kunene was imprisoned from 1997 to 2003 after being convicted of running a Ponzi scheme. While in prison, he often organized parties among the inmates to build goodwill among his fellow inmates. It is reported he spent ten years locked up. He spent four years awaiting trial before serving his six-year sentence.

Kenny Kunene is the owner of New Money Record. In 2012 he released his own album, ZAR Sushi Mix, a house compilation under his own record company.

In December 2010 Kenny Kunene claimed to be bringing Drake and Nicki Minaj to South Africa and Zimbabwe, a claim that was disputed by Nicki Minaj through her Twitter account.