Professor Thandwa Mthembu (born 12 January 1963) is an accomplished academic and leader who became Vice-Chancellor and Principal of the Durban University of Technology in October 2016.

He has over 21 years of experience in university leadership in South Africa. 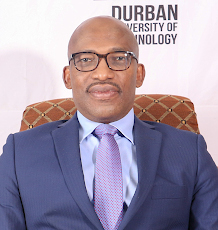 He matriculated in 1980 at St Chad’s High School in Ladysmith, KwaZulu-Natal, after completing his junior secondary education in Nkandla.

In 1982, he enrolled at the University of Fort Hare. He earned a Bachelor of Science (BSc) degree in 1984, with majors in mathematics and chemistry.

He studied at Vanderbilt University in Tennessee, where he earned a Master of Science (Mathematics) in 1987, after graduating with a BSc Honours in Mathematics in 1985.

He returned to South Africa and enrolled at the University of the Witwatersrand in Johannesburg to pursue a PhD in Approximation Theory, which he completed in 1991.

Thandwa Mthembu was Vice-Chancellor and Principal of Central University of Technology (CUT) in the Free State for almost ten years before joining the DUT family.

Drop your queries regarding Thandwa Mthembu Biography below in the comment box.