Bheki Cele (born 22 April 1952) whose full name is Bhekokwakhe Hamilton Cele is a South African politician and member of the African National Congress.

He was appointed as the Minister. of Police by President Cyril Ramaphosa on 27 February 2018 and re-appointed on 30 May 2019. 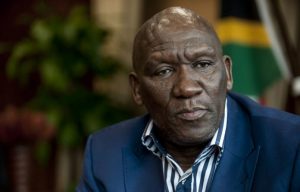 Cele holds a diploma in education.

He is married to Thembeka Ngcobo. They have been married for over 10 years. The couple married on the 2nd of October 2010 and had the traditional ceremony on the 3rd of October 2010.

The white wedding held at Lynton Hall in KwaZulu-Natal while the traditional wedding held their Umhlanga home.

1994: Chairperson of the Portfolio Committee on Safety and Security in KwaZulu-Natal Provincial Legislature.

2004 – 2009: Member of the Executive Council (MEC) for Transport, Safety and Security in KwaZulu-Natal.

May 2014: Deputy Minister of Agriculture, Forestry and Fisheries.

Drop your queries regarding Bheki Cele Biography below in the comment box.