Oscar Mabuyane (born 24 February 1974) is a South African economist and politician. He currently serves as the Premier of the Eastern Cape and the Provincial Chairperson of rather African National Congress. 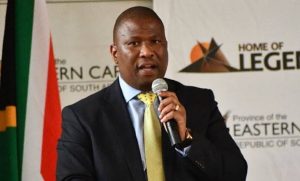 He matriculated from Lekoa Shandu High School in Sharpeville, Transvaal Province. He went on to University of Fort Hare where he graduated with a Bachelor of Commerce degree in Economics.

He is currently pursuing a master’s degree in public administration from the same university.

Mabuyane is married to Siyasanga Mabuyane. They are blessed with three children.

Between 1995 and 2008, Mabuyane was involved in the African National Congress (ANCYL) and the South African Students Congress (SASCO).

He was appointed the SASCO branch chairperson at the University of Fort Hare in 1999 before he became the university’s SRC president in 2000. He became the deputy provincial secretary of the ANCYL in 2008 and served until 2011.

In 2009, he was elected the provincial secretary of the ANC. He was re-elected twice while holding the office.

Mabuyane has an estimated net worth of 20 million rands.