Job Mokgoro (born 15 May 1948) is a South African who serves as the 6th Premier of North West. He is a member of the North West Provincial Legislature and a party member of the African National Congress. 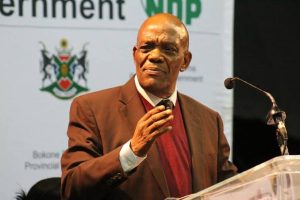 He attended the University of Toledo from where he obtained a master’s degree and a Honorary Doctorate in Public Administration.

He  is married to Yvonne Mokgoro. She previously served as a Constitutional Court judge from 1994 until 2009. They have five children.

Mokgoro has an estimated net worth of $2 million.