Barry Hilton (born 29 January 1956) is a South African stand-up comedian. Known by his middle name, Barry (aka ‘The Cousin’), he is also an actor, television personality, and motivational speaker. 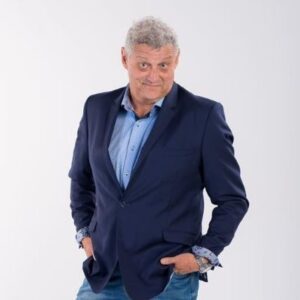 Hilton’s family relocated from Southern Rhodesia to North Wales in 1961, where he attended St Joseph’s Roman Catholic Junior School from the age of five to ten (1966).

Between the ages of 11 and 12, he attended Blessed Edward Jones Catholic High School in Rhyl before moving to Newlands, Cape Town, South Africa, with his family, where his father worked as a bricklayer.

Hilton attended Observatory Boys (now Rhodes High School) from March 1969 to December 1971 but left at the age of 15 to begin an apprenticeship at Joffe Electrical, which he completed in 1974.

After two previous marriages to Janet McKirdy (1976–1980) and Jane Tweedie (1980–2004), Hilton is married to his third wife Sandy Hilton (2007–present). With his wife and children, he currently resides in Hermanus, South Africa.

Hilton met Johnny Noble, who got him his first job at The Holiday Inn in Port Elizabeth, in May 1983, while serving as the maintenance manager of a hotel frequented by the cast of the comedy television show ‘Biltong and Potroast’.

Following that, he worked as a compere at the Millionaires Club in Cape Town for six months before moving to Johannesburg to play at The Jolly Roger, a small tavern.

Hilton is the first South African comedian to appear at the Sun City Extravaganza. When continuing to play as a virtually obscure comedian at the Sun City Super Bowl in ‘Laugh Aid’ 1989, he shared the stage with quirky French actress/dancer/singer Jacqueline Du Gay from Las Vegas.

Drop your queries regarding Barry Hilton Biography below in the comment box.