John Hlophe (born 1 January 1959) is Judge President of the Western Cape Division of the High Court of South Africa.

John Hlophe is controversial for the number and range of allegations of improper conduct as Judge President that critics allege have damaged the credibility of the court. 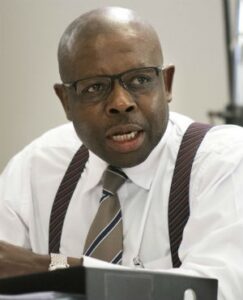 Hlophe taught law at the University of Transkei, South Africa, before being appointed in 1995, aged 36, to sit as the first black judge in the High Court in Cape Town.

He was the first full-time academic to be appointed as a High Court Judge. He was appointed to head the court in 2000.

Hlophe returned to work in 2009, saying he had returned because he had been “out too long” and was tired of living off taxpayers’ money. The settlement talks had “stalled” and the stalemate was preventing him from “reaching his best potential in the profession”.

Just before Zuma announced his official nomination of Sandile Ngcobo as South Africa’s next chief justice, Hlophe said that his decision to side with Zuma had been his undoing.

Hlophe has now[when?] received permission from the Justice Ministry to return to work.