Charles Nqakula (born 13 September 1942) is a South African politician who serves as High Commissioner to the Republic of Mozambique from South Africa. He was appointed by President Jacob Zuma in 2012. 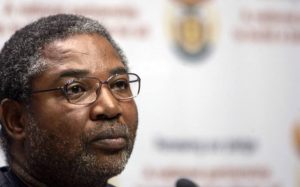 He is married to Nosiviwe Mapisa-Nqakula MP. His wife is the South African Minister of Defence and Military Veterans.

Nqakula started his career as a journalist, covering political news from 1966 to 1982. He began his political career as a Publicity Secretary for the United Democratic Front (1983) and joined the South African Communist Party in 1991 but was appointed as a MP and Member of the National Executive Committee for the ANC in 1994.

Nqakula was selected as a Parliamentary Councilor for the Office of the President in 1999 and became a Deputy Minister for the Department of Home Affairs in 2001. In 2002 he became the Minister for Safety and Security and thereafter the Minister of Defense (2008-2009).

He has been the National Chairman for the South African Communist Party since 1999; Political Advisory to the Presidency since 2009; and the High Commissioner for the Republic of Mozambique since May 2012.

Nqakula has an estimated net worth of $1 million which he has earned from his successful career.