Walter Mokoena (born in 1978) is a South African sports personality and news anchor. He is currently the Special Adviser to the Minister of Sports, Art and Culture. 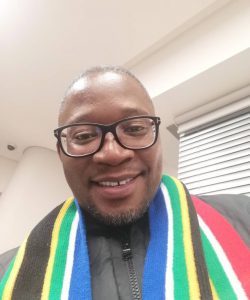 Walter Mokoena attended Mphanama Comprehensive High School where he served as the president of the SRC when he was just 16 years old. He graduated from high school in 1996.

He is currently studying towards his Masters degree in Water governance and Diplomacy at UJ.

He is the first child of Aaron German Mokoena and Betty Velephi Nene. Walter has three siblings.

He is married to Nosizwe Vuso who had been his long term girlfriend. The couple tied the knot in 2016 in Pretoria. They have a daughter together.

Walter also has a daughter with Pearl Thusi.

His broadcasting career started in Heart FM in 1998. While working at Heart FM, he was also working as a City Press newspaper soccer correspondent freelancer.

In August 1998, he joined Kaya FM as a sports anchor. In 2000, Mokoema took over “Mabaleng” at SABC as an anchor. This prime-time sports show on Saturday afternoons propelled his career even further.

His career took on a steady ride when he was chosen to present the FIFA World Cup in 2010; live from Zurich. He was also involved in live coverage of the Athens Olympics.