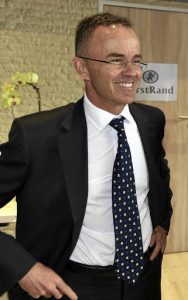 After serving articles at Deloitte & Touche, Mr. Alan graduated from the University of the Witwatersrand in 1991 and qualified as a chartered accountant.

He worked for Deloitte & Touche for five years before being named to the partnership in 1996. He joined Rand Merchant Bank in 1998 (prior to the formation of FirstRand Limited) and was appointed CEO in 2008.

In October 2015, he was promoted to deputy CEO of FirstRand. Since then, Alan has been appointed CEO, effective April 1, 2018 succeeding Johan Burger.

As the Chief Executive Officer and Executive Director of FirstRand, the salary of Alan Pullinger at FirstRand is $41,265,000.

Drop your queries regarding Alan Pullinger Biography below in the comment box.