Vuyolwethu Ngcukana (born 3 February 1983) is a South African actor, event MC, and television presenter. He plays the role of Schumacher on the Mzansi Magic soapie The Queen. 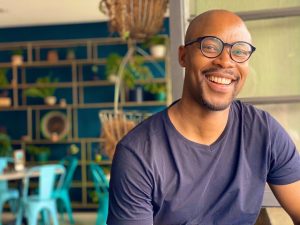 Vuyo was studying Public Relations in college but had to drop out of school to support his family. He always had a passion for acting even while in school.

The actor is not married but he is currently in a relationship with South African actress Renate Stuurman. The duo made their relationship public in 2018.

Vuyo has three beautiful daughters from his baby mama.

Vuyo next appeared in an episode of the eKasi+ drama anthology series eKasi: Our Stories entitled “Ngwana wa Tsenwa” (Season 5, Episode 38), which first aired on 1 April, 2014.

His big break came when he was cast as Schumacher in the Mzansi Magic soapie The Queen, first appearing in the series premiere on 1 August 2016. Initially recurring for the first four seasons, he was promoted to starring cast for Season 5.