Thulani Hlatshwayo (born 18 December 1989) is a South African professional footballer that plays as a defender for both Bidvest Wits and the South African national team. 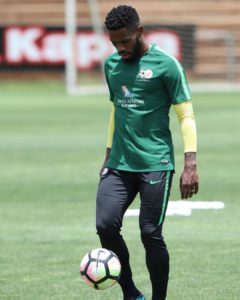 His wife is known as Kenosi Masegela. They got married in the year 2017, and together they have a son.

He made his professional debut for Ajax on 5 August 2009 in a 2–1 win against Orlando Pirates. This was in a quarter-final match of the 2009 MTN 8 tournament at the Coca Cola Park in Johannesburg.

After years of good showing for both the club and the country’s national youth teams, Thulani was then promoted from the club’s youth academy ranks.

He signed a pre-contract with Bidvest Wits in the early months of 2014. This ended speculations that he was heading to Orlando Pirates.

He has been a force to be reckoned alongside another former Ajax CT player, Thato Mokeke. Hlatshwayo started in Bidvest’s opening league game for the season against SuperSport United.

He takes home over R150,000 as salary playing for Bidvest Wits.

He has an estimated net worth of around $500,000 to $2 million which he has earned throughout his career as a professional footballer.