Tshiamo Molobi (born 17 May 2003) is a South African actor known for his recurring role as Lefa, a student who always has a plan up his sleeve, in the e.tv soapie Rhythm City. 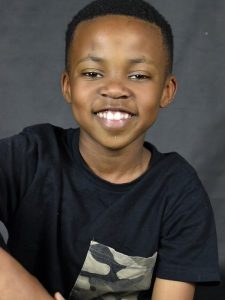 In the 2014 romantic drama film Pad na Jou Hart (Road to Your Heart), directed by Ivan Botha and Donnalee Roberts, he made his cinematic acting debut.

In 2015, he made his small screen debut as Lemo, Ipeleng’s rowdy younger brother (Thuso Mbedu), in the MTV Base youth drama series MTV Shuga: Down South (Season 5 of the show).

Happiness Is a Four-Letter Word, directed by Thabang Moleya, was his next film in 2016.

He then earned the recurring role of Lefa, Reneilwe’s (Amo Chidi) and Kea’s (Kamogelo Molatlhoe) brother, on the e.tv soapie Rhythm City, in which he made his first appearance on February 27, 2019.

He received another recurring role later that year, this time as Tshepo on the Mzansi Magic soapie The Queen, where he first appeared in Season 4, Episode 59, which aired on October 17, 2019.

Tshiamo was later cast in the Mzansi Magic drama DiepCity as Nox’s (Nozuko Ncayiyane) intelligent, straight-A student younger brother Sibusiso, who is fatally murdered during a house heist he was not supposed to be a part of.

Drop your queries regarding Tshiamo Molobi Biography below in the comment box.