Thembi Siweya is a South African politician,  youth activist and philanthropist who serves as a Deputy Minister in the Presidency of South Africa. 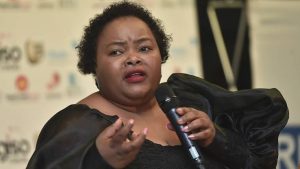 Siweya matriculated in Saint Morgens English Medium School in Mokopane Limpopo province then went on to obtain a Bachelor’s degree from the Medical University of South Africa. She is also running an MBA program in the same school.

She was a member of the ANCYL Provincial Task Team’s (PTT) Communications Sub-Committee in 2013. Since 2015, she has served on the African National Congress Youth League’s (ANCYL) National Executive Committee (NEC).