Ansu Fati whose full name is Anssumane Ansu Fati Vieira is a Bissau-Guinean professional footballer who plays for La Liga club Barcelona and the Spanish football team as a forward. 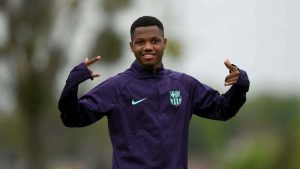 Biography
He was born on the 31st of October 2002 (age 17) in Bissau, Guinea Bissau to Bori Fati and Lurdes Fati. He was raised in a small west African nation of Guinea-Bissau by his parents.

Personal Life
His father, Bori Fati is an ex-footballer, who was from Guinea-Bissau. He has four siblings i.e. two brothers “Miguel” & “Brahima Fati” and two sisters Djeny & Djucu Fati.

Fati’s brothers Braima and Miguel are also footballers; both are also linked to Barcelona.

Height & Weight
Fati stands at a height of 1.78m and an estimated body weight of 75 kilograms (165 pounds).

Career & Goals
Fati joined the Barcelona youth academy. He made his professional debut for FC Barcelona at the age of 16 years, 9 months and 25 days, in a La Liga match against Real Betis on 25 August 2019 which ended 5 – 2 score in favour of FC Barcelona.

Fati on 31 August 2019 became the Barcelona senior team’s youngest goalscorer ever and the third-youngest scorer in the history of La Liga after scoring his first professional goal in the match between Barcelona and CA Osasuna at the El Sadar Stadium at the age of 16 years and 304 days.

On 14 September 2019, Fati became the youngest player in the history of La Liga to score and assist in the same match aged 16. Fati scored in the 2nd minute and assisted Frenkie de Jong in the 7th against Valencia to take the record.

On 17 September, Fati became the youngest player to feature for Barcelona in the Champions League competition at the age of 16 after his debut in a 0–0 away draw against Borussia Dortmund, years and 321 days, breaking the previous record held by Bojan Krkić (17 years and 22 days)

On 10 December, Fati at the age of 17 years and 40 days became the youngest goalscorer in UEFA Champions League history after scoring the game-winner in Barcelona’s 2–1 victory over Inter Milan at the San Siro.