Ronald Lamola (born 21 November 1983) is a South African politician and lawyer. He serves as the Minister of Justice and Correctional Services.

He has been a Member of the National Assembly of South Africa since 22 May 2019. He is a member of the ANC’s National Executive Committee and National Working Committee. 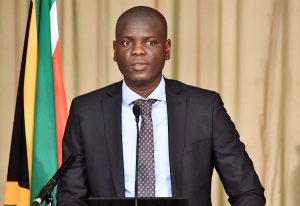 He matriculated from Mchacka High School in 2000 and went on to study law at the University of Bendable.  During his time at the university, he became President of the Student Representative Council (SRC) and Chairperson of the South African Students Congress in Limpopo.

He attained a post-graduate certificate in telecommunications policy and regulation and management from Wits Enterprise. He holds two master’s degrees from the University of Pretoria.

Lamola is married to Bawinile “Winnie” Msiza. The couple got married on March 2013 at the Cunning Moor in Bushbuckridge, Mpumalanga.

Lamola started his law career as a lawyer at TMN Kgomo and Associates in 2006. Later on, in 2009, he was employed as a manager of the Govan Mbeki Local Municipality.

He was the Director in the Office of the Mpumalanga MEC for Culture, Sports and Recreation from 2009 until 2011. Shortly after in 2011, he briefly served as the acting spokesperson for the Mpumalanga Premier David Mabuza.

He is a former Deputy President of the African National Congress Youth League (ANCYL). He served alongside Youth League President Julius Malema prior to Malema’s expulsion from the position in 2012 for bringing the party into disrepute.

Lamola has an estimated net worth of $500 000 which he has earned from his career as a lawyer and politician.