De Sá is a former footballer and played as a goalkeeper. He is also one of the handfuls of South Africans who have represented their country in three different sports – soccer, basketball and indoor soccer. 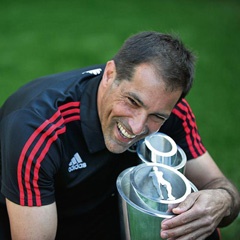 During his career, Roger De Sa played for major South African clubs Moroka Swallows and Mamelodi Sundowns, both of which he captained as well.

De Sá was capped only once in his career during a 1994 African Cup of Nations qualification match against Zambia. He was part of the 1996 African Nations Cup-winning squad.

In September 2012, De Sá was appointed as the coach for Orlando Pirates. Before his appointment to Orlando Pirates, De Sá took over the full coaching reins at Bidvest Wits in 2001.

De Sá rejoined The Students in June 2007 after an absence of two years which he spent coaching Engen Santos.

On 31 January 2014, De Sa resigned as coach of Orlando Pirates. Da Sa was appointed Ajax Cape Town coach in 2014 but stepped down from the position after a winless start to the 2016/17 PSL season.

In January 2017, Da Sa was announced as Maritzburg United’s manager, but he parted ways with the club in March of the same year.

On 8 September 2017, Roger Da Sa was named as the head coach of Platinum Stars after the departure of British coach Peter Butler.