Nina Hastie (born 19 May 1983) is a South African stand-up comedian who has performed at every major venue in the country, as well as at all of the country’s major comedy festivals, during the last 15 years. 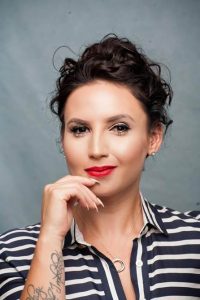 She is one of the most experienced live television presenters in the country, having hosted over 500 episodes of Trending SA, South Africa’s progressive late-night chat program.

Nina has published columns for publications such as The New York Times, Grazia Magazine, and News 24.

She has also worked in radio, most notably co-hosting Touch HD’s Breakfast show with Glen Lewis. Hastie has been nominated for a SAFTA and a Comics Choice Award for writing on television.

Nina’s work as an MC has been described as “locally relatable,” “hilarious,” and “refined.” Hosting the 2019 and 2020 Assegai Awards, the SA Hip Hop Awards, the 2019 SATMA Awards, and the 2019 JSE Awards are among her corporate career highlights.

She has an estimated net worth of $200,000 which she has earned as a comedian.

Drop your queries regarding Nina Hastie Biography below in the comment box.