She made a controversial exit from the TV series in 2016 with the intention to pursue other interests breaking the heart set of millions of South Africans. The award-winning actress however made a triumphant comeback on the popular sudser in December 2019. 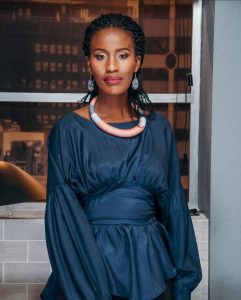 She is reportedly dating Gwydion Beynon, an award-winning screenwriter.

She was part of the Class of 2009 that received the Mandela Rhodes scholarship. Masasa went on to obtain a degree in Dramatic Arts majoring in Performance and Directing from the University of the Witwatersrand, Johannesburg.

Her decision to become an actress was inspired by the likes of Nthati Moshesh, Nomhle Nkonyeni and Sello Maake Ka Ncube and she had the opportunity to work with them. Although her passion lies in acting, she is also interested in producing and directing.

Prior to her role on Scandal! she had two television guest appearances: as Jackie’s PA on the M-Net soapie Egoli and as Eunice on the BBC crime drama Silent Witness.

On stage, she appeared in a trilogy of plays directed by James Ngcobo at the Market Theatre in Johannesburg: Amen Corner, Sundjata and Nogogo. She played Antigone in Greg Hoffman’s production of Oedipus @ Koönú, which toured to the Grahamstown Festival of the Arts.

She also acted in the 2011 feature film Machine Gun Preacher.