Maxx Moticoe is a South African actor and guitarist popular for his starring role as Ayanda Nkosi in the SABC3 telenovela The Estate. 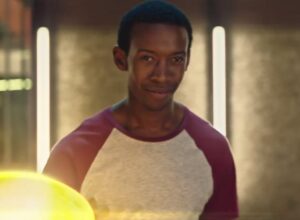 He matriculated from Randfontein High School in 2012 and in the year 2016 went on to complete a BA in Performing Arts from AFDA.

On February 7, 2017, he made his first appearance on television in a cameo in an episode of the SABC1 soapie Generations: The Legacy.

The next year was his breakthrough year, with his first appearance in the recurring role of Melusi in the e.tv soap opera Rhythm City on March 6, 2018.

From August 22, 2018, he had a recurring appearance as Mothusi Moche on the SABC3 police procedural series The Docket, in which he appeared in all 13 episodes.

He finished the year with another recurring appearance, this time as TJ in the 1Magic soap opera The River, which he first appeared in on October 10, 2018, in Season 1, Episode 183.

In 2019, he landed yet another major recurring role, this time as Felix in the fourth season of Mzansi Magic’s prison drama Lockdown, which premiered on April 6, 2019.

Drop your queries regarding Maxx Moticoe Biography below in the comment box.