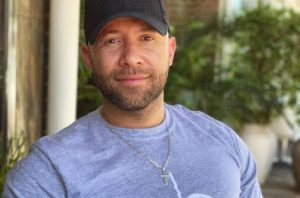 He attended New Orleans High School in South Africa.  In 1999, he obtained a Bachelor’s degree in Filming and Video City from Varsity School of Media and Creative Arts.

During his undergraduate degree, he worked on making several short independent films. At the age of 19 in 1991 after graduation he was auditioned for the film Gangsters and dancers. Unfortunately, the film was cancelled before its production. But, then he received the role of Shaun Jacobs in the television series Backstage.

Then he made notable appearance in the South African soap opera Generations where he played the popular role ‘Bradley Paulse’. He also starred in several South African films such as Dollars and White Pipes, Swop! and Mega Python vs. Gatoroid.

In 2006, he won the Golden Horn Award for Best Actor in a Feature Film for the role in the blockbuster film Dollars and White Pipes. In 2007 he starred in the television serial Scandal! and played the critically acclaimed role ‘Valentino “Tino” Martens’.

Brink has an estimated net worth of $2 million.